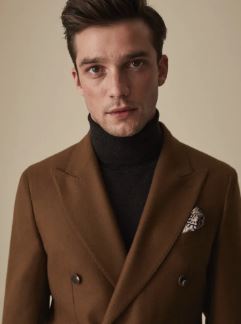 The double breasted suit is a longtime classic that seems to make comeback after comeback. A wardrobe staple with a traditional feel , with accent buttons to give a modern update . Balmain has been a key designer championing the double breasted look, making the angular shape of its jacket a key symbol and trademark aesthetic of the brand. High street/ designer versions of the style have also been seen in the stores. This chocolate brown suit jacket for men is a recent example of what’s on the high street right now. A versatile unisex design as seen on both men and women , the double breasted blazer is definitely a piece which will be staying on trend for seasons to come.